Am I the Black Rider? Yes.

I’ve had a couple opportunities to tagteam guest lecture on contemporary poetry at an Introduction to Literature course at Murdoch University because of the kindness and sweetheartedness of Amber Fresh asking me along.

I’d already had concrete poetry on my mind and heart, going so far as writing some, and wish I had the wherewithal to publish a blank-paged book titled You write it, but that’s been done before (but I can’t remember who by or when.  I think it was 1960s Czech concrete…).

Amber introduced me to PiO’s work and I got hooked.  Then I found out PiO had launched Eric Dando’s Oink Oink Oink and it was all over. 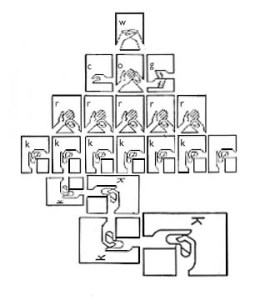 PiO does much more than concrete. His birth certificate says he’s called Pangiotis Oustabasides and over time he’s also been called Peter Oustabasidis, P.O., Pi-O, π-O and PiO.  He was three years old when his family migrated…